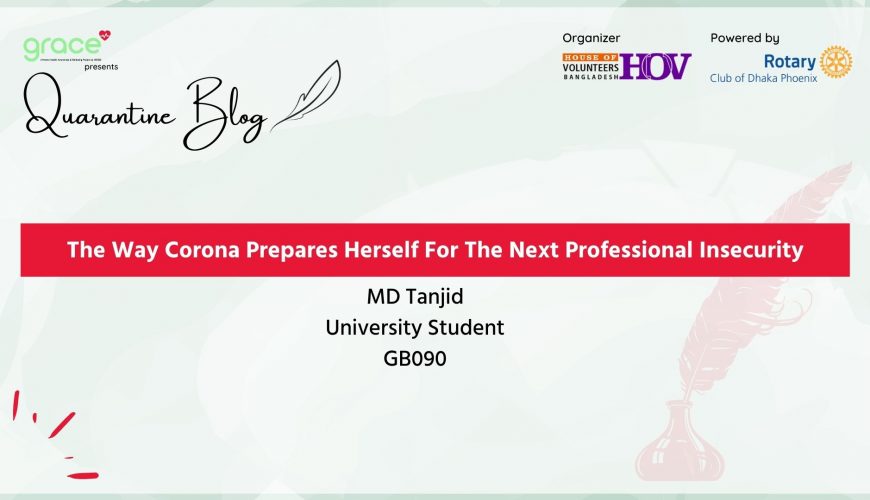 The way Corona prepares herself for the next professional insecurity

Coronavirus: We may face a changing world after this epidemic

What were you doing in the first week of January this year? Remember? The new year has just begun. You probably had a lot of plans for this new year. Lots of dreams. Lots of promise.

Let’s say you met one of the world’s most famous futurists in the first week of January. He told you that in just three months, hundreds of millions of people around the world would be trapped in their homes. The big cities will feel like lifeless mortals.

Roads and ghats will be deserted even during the day. Schools, colleges and universities will be closed. Shops, bars, restaurants and shopping malls will remain closed. All sports will be shut down – even the Olympic Games will be canceled. Prisoners will be asked to leave the jail and go home.

Each country will close their borders. Aviation will be closed. The stock market will collapse. In the supermarket, people will fight for toilet rolls and food packets.

Billions of people will become unemployed in a few weeks. In the terror of an invisible enemy, every man will avoid another man, at least ten hands away.

In January, you would dismiss this prophecy as crazy delirium. This futurist seemed insane. It was difficult to find people to believe him.

As you read this sentence, about one third of the world’s people, or about 2.3 billion people, are sitting at home at the moment. There is no precedent in the history of human civilization for so many people being imprisoned in their homes at the same time, continuously, for so long. The world system of the 21st century has been shattered by the attack of an invisible virus.

No one can give a clear idea of ​​when to get rid of this condition. But coronavirus experts and futurologists who have already begun to talk about the next world all agree on one thing: the world is no longer what it used to be. The effects of what has happened in the last few months will be far-reaching.

Prepare yourself to prevent coronavirus:

Coronavirus is spreading rapidly in the world. More than 3,000 people have died in China in recent days. Another 60,000 affected. There are also reports of the disease in many other countries. In our country, no one has been reported to be infected with this disease yet. So there is no way to be safe. Rather we should be wary of its prevalence.

Panic over coronavirus will not help. This is a very important aspect to be aware of as most coronavirus cases can appear mild and flu-like. The news that many of the victims have recovered is also comforting.

My and you should do?

Stay away from anyone who is infected.

Keep hands clean at all times. Wash your hands thoroughly with handwash before or after eating.

Ask everyone to wipe off the phlegm, sputum, and cold with a tissue and to cover their face when sneezing. Do this yourself.

Let everyone in the family know about this disease and its cure.